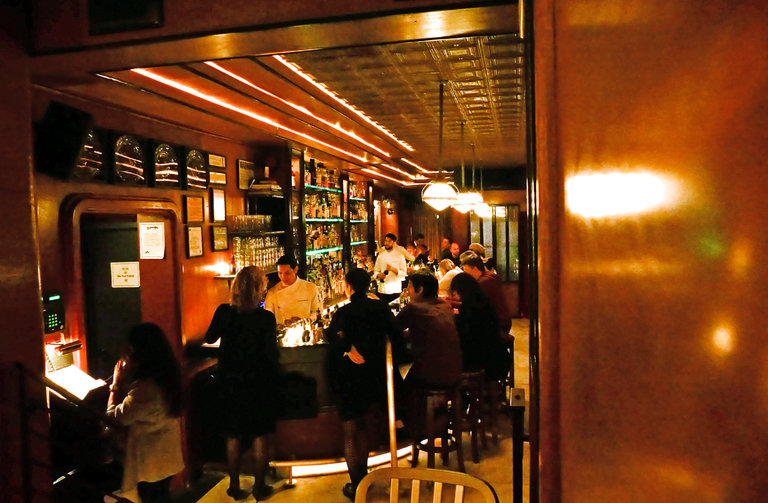 Cocktail bartenders, it should come as a surprise to no one, like to drink in cocktail bars.

In "Where Bartenders Drink," a new book by Adrienne Stillman published this week by Phaidon, the place most frequently cited by the more than 200 bartenders surveyed was Artesian, the much-awarded London cocktail destination.

It was closely followed by the New York cocktail bars Employees Only, the Dead Rabbit Grocery and Grog, NoMad Bar and Attaboy; the London bar Nightjar; and Bar High Five in Tokyo.

"At one point, we discussed whether it should be titled, 'Where to Drink Cocktails,'" Ms. Stillman said of the book.

While she interviewed primarily shaker-and-jigger types for the book, there is variety among the endorsements.

The conventional wisdom that cocktail bartenders spend a lot of time in dive bars is partly borne out. Such saloons represent about 5 percent of the 750 bars that are recommended.

But famed hotel bars like the American Bar at the Savoy Hotel and Dukes Bar in the Duke Hotel, both in London, have their fans. Favored, too, are bars at restaurants like Keens Steakhouse and the "21" Club in New York, and Floridita in Havana.

The book is a companion piece of sorts to "Where Chefs Eat," which was published by Phaidon in 2013. The scope of "Where Bartenders Drink" is ambitious. Every continent is represented except Antarctica (plenty of ice; no cocktails).

So, if you happen to find yourself in need of a decent martini in Christchurch or Cape Town, the volume has you covered.

"I probably could have gotten 750 bars in New York City alone, but covering the world was the idea from the get-go," Ms. Stillman said.

What draws bartenders to a tavern not their own? "Service came up again and again," she said. "The other thing is professional admiration. People would recommend bars where they said the owner or head bartender was really inspiring."