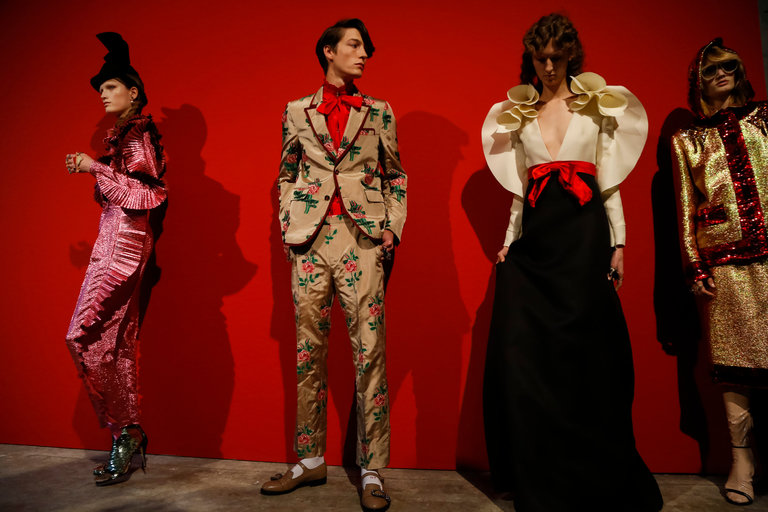 So, the sparkly dresses and heat tech have been worn; the ball, and the other shoe, has dropped. The year 2016 is over, and 2017 has begun. It's no longer time to look back, but to look forward. And what do we see? When it comes to fashion - or more important, fashion as it affects life - there will be interesting times ahead. Here are some opening thoughts on what to watch for in the coming months.

A new look in Washington and Paris.

Pantsuits - at least on women - are out. So are the smart-casual no-tie look and the hard-working look of men in rolled-up shirt sleeves.

In Washington, we are entering the era of the boxy, oversize suit, the big knot, the taped-together tie, and, maybe, European brands. As the Trump administration prepares to move into the executive wing, fashion - and the American capital - are preparing for a whole new style statement. The inauguration this month will throw down the gauntlet. What the president-elect will wear (Brioni is my best guess) may ultimately be less significant than what his wife and eldest daughter will wear. Judging by the designs that Melania and Ivanka Trump wore on the campaign trail and on New Year's Eve, the age of American designers in the White House may be over

On Dec. 31, after all, Melania celebrated in a black Dolce & Gabbana sheath (Stefano Gabbana, Instagramming the news, proudly joined the "I will dress Melania" camp). And previously, when stumping for her father, if not in her own brand, Ivanka opted for Roland Mouret and Alexander McQueen. If that pattern continues, that's as big an upending of the soft status quo as anything Mr. Trump has pledged. Come Jan. 20, we'll get the first real sense of what to expect.

In France, where voters go to the polls in April and May, a center-right candidate, Francois Fillon, is known for combining Savile Row tailoring and Italian style, as well as for his fondness of red socks from Gammarelli (official tailor to the pope). By contrast, his far-right opponent, Marine Le Pen, has been characterized as promoting an image that is "mumsy" and "frumpy" - and not remotely high-fashion, in contrast with Britain's prime minister, Theresa May - perhaps to try to make her party, the formerly fringe National Front, more accessible. Either way, the Fillon-Le Pen oppositional image-making should have a filter-down effect on fashion. Also on the runways.

More upheaval on the runways.

This year, the name to watch is indubitably Raf Simons, who makes his debut at Calvin Klein at New York Fashion Week in February, with a promise of shaking up the whole system. He'll introduce his vision for the brand with a dual men's and women's wear show, thus giving his seal of approval to the new catwalk-combination-of-the-genders trend, which extends from New York to London and Milan, and which includes Gucci, Burberry and Bottega Veneta. Think of it as the bandwagon of the sexes.